BH BIkes is a 100 year old bike company based in Spain. They’ve recently turned their considerable expertise toward the electric bike market with their brand, Easy Motion. We currently are offering the Neo lineup of ebikes from them which covers the full range from folding bikes to mountain bikes to city and road bikes. This season we’ve brought in the Neo City, Cross, and Carbon models. All three are very exciting additions to the lineup. 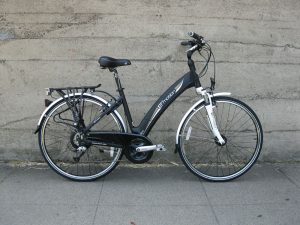 The Neo City is a great all around town/commuter bike with a host of value features. The step through frame makes it very easy to ride. A single lever-activated adjustable stem allows multiple riders with different preferences to share a bike and make changes between riders quickly without any tools. 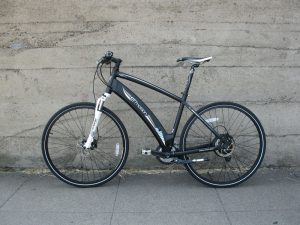 The Neo Cross is designed to be a hybrid bike that provides mountain bike-like features with road riding capabilities. Its a precision machine that lets you jet around town smoothly and nimbly. It sports quality hydraulic disc brakes front and rear and Shimano 24-speeds. 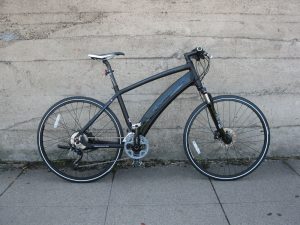 The Neo Carbon is truly a work of art! The frame, seatpost, and handlebars are made of carbon fiber making this the lightest ebike in the shop. Hydraulic disc brakes,  Shimano XT 30-speed drive components, and a Suntour suspension fork with lockout round out the offerings of this exquisite ride. I expect this bike to appeal to seasoned cyclists accustomed to the look and feel of high-end road machines. They won’t be disappointed!

All three bikes sport battery packs integrated into the down tube which makes them the least ‘electric-bike-looking’ rides in the shop. Powerful geared motors and torque sensor activated pedal assist make these ideal candidates for the hilly challenges in and around Ashland. Easy Motion also offers the best-in-the-business 5 year warranty on their bikes. With 100 years of experience under their belts these folks know what it takes to build a quality product that satisfies for a good long time. Come see these beauties from Spain!

More bikes, less cars. That’s the holy grail here at Ashland Electric Bikes. The more a bike can handle the various needs of riders, the more this end can be met. The new Biruni Electric Cargo Bike serves that purpose very well. Hauling goods and small passengers is a daily requirement for many folks, and this bike does both. It’s very ultilitarian and at the same time presents a high level of style. Its a sweet blend of form, function, and plain old ‘cool factor’! 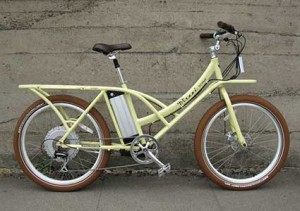 The Biruni sports a 500 watt direct drive motor, a 36V 12AH Samsung battery, and both pedal assist and manual throttle control. 8-speeds, disc brakes, and integrated racks front and rear round out the great features of this bike. A dedicated rear passenger package is in the works and hopefully will be available soon. The bike is easy and fun to ride and we get approving comments every time we take one out for a spin. 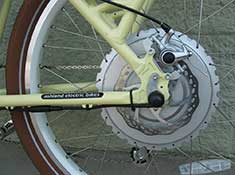 The Biruni Electric Cargo Bike is relatively new on the ebike scene and we’re confident that it will quickly become a top seller here at the shop. Its a lot of bike for only $2499. In fact, we’ve already sold 2 of the 3 bikes from our initial order. So, come see what the buzz is all about. 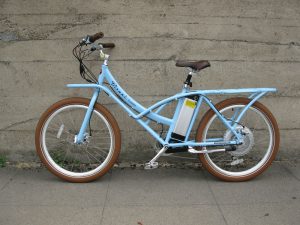 This article first appeared in the September issue of the Ashland Locals Guide:

Ebiking For the Health of It

There is a common misconception regarding electric bikes – that they do all of the hard work for you. It’s true that they complement the pedaling power of the cyclist as well as provide assistance whenever needed, but it’s important to note that they are not the same as a motorbike or scooter.

Because electric bikes reduce the level of effort required when compared to a regular bicycle, they offer the perfect way to bridge the gap between no cycling and cycling on a regular basis. Health experts universally agree that even modest amounts of regular exercise are far more beneficial than no exercise at all and as such, ebikes are ideal for helping people of all ages enhance their fitness. Riding to work, school, or the grocery store on an electric bike offers significant health benefits to the rider. 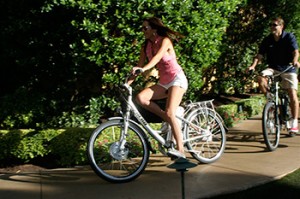 Some even believe that electric bikes provide greater exercise opportunities simply because ebike owners choose to ride their electric bikes more than they would a regular bike. Riding an electric bike is often so exhilarating that it may not even seem like you are exercising, which makes people far more likely to stick with it, therefore increasing the health benefits even more so. Choosing to ride your ebike means that the car stays parked, therefore no exhaust fumes are generated, and that, of course, results in health benefits for everyone. Any way you look at it, riding an ebike more of the time is a healthy choice for yourself and everybody around you. 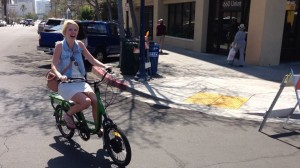 We’re making healthy choices at Ashland Electric Bikes that will benefit us all. With the help of my new associate, Blaine Pickett, we’ve reorganized the shop from stem to stern to maximize efficiency and make your visit more pleasurable. Our extensive array of accessories are more clearly displayed. The installation of a state-of-the-art, Oregon-made work stand will make servicing ebikes much easier and more of an ergonomically friendly experience for Blaine and me. Happy technicians make happy sales assistants make happy customers. Everybody wins. So, come on down and see all that’s new at the shop…for the health of it! Be sure to ask about the new electric cargo bikes by Biruni Motorbikes of California. They’re helping us create a whole new healthier world for one and all.

This article first appeared in the June issue of the Ashland Locals Guide:

Are you wondering just who it is that’s buying these new, seemingly expensive bicycles? (Compared with a new or used car they’re a bargain!) Let me tell you. My customers are, first and foremost, people who want to make a difference in the world. They want to do something healthy for the environment and for themselves. They recognize that the majority of their trips around town could be done without the car. Additionally, they’re also an honest bunch; they know that in truth they’re just not going to make very many (if any) of those trips on a standard bike. Whether its the last steep hill home or time constraints or physical limitations, they know that a regular bike will probably become a born-of-best-intentions addition to the garage clutter more than it will be a regularly used means of transportation. 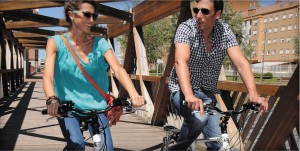 So, who is a candidate for joining the growing ranks of ebikers? Any household that is considering a second car would do well to consider electric bikes. You can manage many of your chores about town quickly, easily, and have a ton of fun along the way! How about all the young graduates this year? What if, instead of their first car, you set them along a more eco-friendly, sustainable path with their first electric bike? Anyone with access to a car for occasional use would do well to consider an electric bike for themselves for more daily use when a car is simply not necessary. 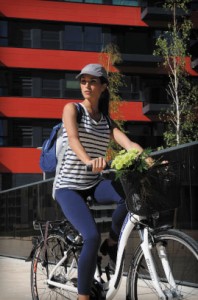 Has that demon Time, or some physical ailment taken you down a few notches from where you’d ideally like to be, yet you still want to ‘be a part of the solution’ in the world? You’re a prime candidate for an electric bike. You recognize that these are not expensive toys but are in fact, quality transportation devices that cost a fraction of what it takes to buy and maintain a car. Additionally, do you know anybody who has ever lost weight or gotten in better shape by driving a car? The notion that ebikes are ‘cheating’ or that you won’t get any exercise is simply incorrect. Ask any ebike owner. 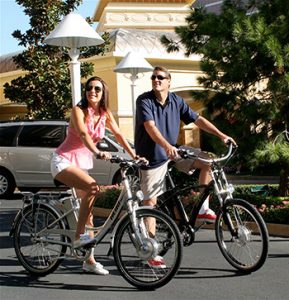 The bottom line for me is that I want to see a world with more bikes and less cars. Electric bikes are opening the door to a wide range of people who would like to incorporate bicycling as legitimate alternative transportation in their lives. If you’re ready to join the quiet revolution and promote a cleaner, healthier, more human-scaled world maybe its time you become someone who rides an electric bike. Come take a test ride; all this will become clear in an ear-to-ear grinning flash!

This article first appeared in the July issue of the Ashland Locals Guide:

The Wheels Go ‘Round & ‘Round

There are various types of motor drive systems in use on ebikes today. The most widely used type are hub motors, and that will be the focus of this article. A hub motor is an electric motor that is laced via the spokes directly into one of the wheels of the bike. It serves as the central hub/axle assembly. There are two types of hub motors to choose from: direct drive or internally geared. 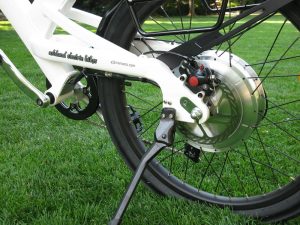 Direct drive motors are the simplest design of the two. A relatively basic electric motor becomes the central hub and axle of the wheel. As the motor turns once, the wheel turns once, hence the name direct drive. They are smooth and quiet running at higher speeds and are very durable. No internal moving parts means nothing to wear out. Direct drive motors can handle higher voltages and stand up to considerable (ab)use. The downside is that they create a noticeable amount of drag that can be felt when pedaling the bike without running the motor. They are heavier and provide proportionately less riding range than the more energy efficient geared motors. 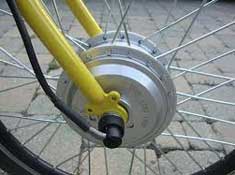 Geared motors have a set of planetary gears inside the case that allows a smaller motor to run in the neighborhood of a 5 to 1 ratio, increasing the power output relative to its size. This allows them to deliver more power from a standstill with less electricity than a direct drive. Geared motors are smaller and lighter. They create very little rolling resistance when running under pedal power alone and their efficiency provides greater range from each battery charge. The flipside is that they are a bit noisier and, since they have moving gears inside, will require replacement parts eventually.

As to the question of which is better; there is no definitive answer. It depends on your needs and desires. If you’re looking for an ebike that’s lighter and feels more like a standard pedal bike, a geared motor is the choice for you. If you want a rock solid motor that can ‘take a licking and keep on ticking’ or you want the quietest option available, a direct drive motor is the choice for you. Ultimately, choosing between different bikes should be based on much more than just the motor type. The final decision should be made, quite literally, by the seat of your pants. Come test ride the different styles and see which one feels the best to you. All details and specs aside, the bike that you’ll say “Yes” to riding the most is the best bike for you. So, what are you waiting for? Its time to discover your new two-wheeled partner in adventure and travel!