In Praise of the Road Diet

I have been listening to the ongoing local debate regarding the N. Main St. “Road Diet” and felt it was time to share my opinion. For starters, I applaud the city for their actions; their decision to support safer bicycling now and, more importantly, into the future, is truly visionary. The transportation landscape is changing all over the planet, and the steps we take now at the civic level will either anticipate and support those changes or stand as impediments to their healthy unfolding. 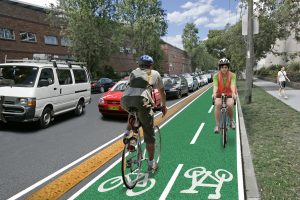 Two-wheeled transportation is on the rise globally, as well it should be. Dwindling resources, shrinking budgets, and rising pollution levels are driving (pardon the pun) this shift. Asia and Europe are leading the way with the USA following suit, slowly but surely. Many cities and towns including New York, Washington DC, San Fransisco, LA, Minneapolis, Chicago, and Portland are all making great strides to expand their bicycle-friendly infrastructures. Why would we in Ashland NOT want to do the same? We have the fairest, most bike-friendly weather in the state of Oregon yet we rank last in terms of dedicated bike trails and right-of-ways. 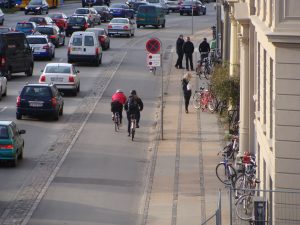 Bicycling is far more cost effective on a personal as well as a governmental level. According to the federal Consumer Expenditure Survey for 2012, the average US family of four spends about $10,000 a year on transportation – more than they spend on food. Crazy! Portland is known as one of the most bike friendly cities in the US. The cost of their entire bike infrastructure to-date is roughly equal to the price of one mile of freeway. Did you get that? One single mile. Contemplate that figure the next time you’re sitting alone in your car waiting for a traffic light to change. 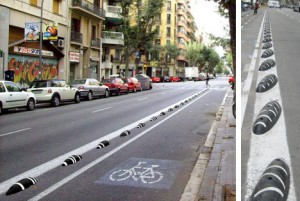 Electric assisted bicycles are profoundly changing the alternative transportation arena. Ebikes are allowing countless more people to choose two-wheeled travel over automobile usage everyday. Only 55% of new ebikers rode their standard bikes weekly or daily before buying their ebike. After the purchase the number of weekly or daily riders rose to 93%. The few customers who had never ridden bikes as an adult (6%) are now also riding weekly or daily. Bicycles are not the end-all solution for everybody in every circumstance, but they are most assuredly a major component of the emerging changes in the way we move about. 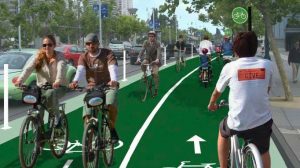 So, thank you City of Ashland, for having the forsight to implement the “Road Diet”, a singular piece of the larger unfolding transportation landscape changes. Now, continue the momentum and find a way for bicycle traffic to safely navigate the downtown area and beyond. The future is coming, and an ever growing percentage of it will arrive on two wheels instead of four. Let’s show the way.