We had a successful launch of our first annual electric vehicle show in town at the Scienceworks Museum a few weeks ago. All the big brand hybrid cars were in attendance (Nissan, Ford, Chevy, etc.) as well as Brammo Electric Motorcycles and a handful of unique one-of-a-kind converted cars and trucks. Senator Jeff Merkely stopped by for a brief walk through of the show. 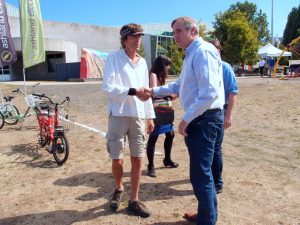 As it turns out he owns an electric car already and I took the opportunity to encourage him to consider adding an electric bike to his stable (literally) next to his horses! We chatted briefly about the larger challenges facing us as a statewide community and I thanked him for his part in ‘fighting the good fight’ in the crazy and convoluted hallways of Washington DC. 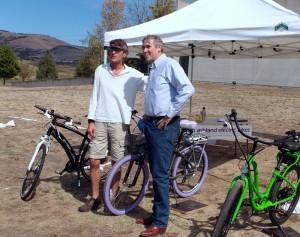 The big event of the day was announcing the winner of the beautiful Biruni Electric Cargo Bike that the Lions Club raffled off as part of their annual fundraising endeavors. The lucky winner came by the shop this past week to pick up her prize and before leaving, her husband bought a second electric bike so that they can ride together! 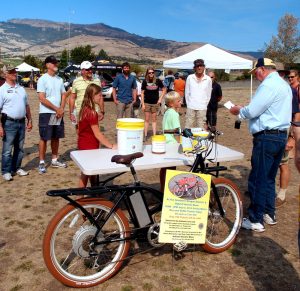 As part of the day’s activities a handful of us participated in a panel discussion about the proliferation of electric vehicle innovation and interest that is evident here in the Rogue Valley. It was part of a larger project by the Smithsonian Museum which will culminate in a television/video presentation sometime next year. I’m grateful to have been chosen to speak on behalf of the electric bike segment of the movement. I’ll be sure to share the video from this event as well as my private interview with a Smithsonian representative which will occur in the next few weeks. Its great to be able to spread the e-bike/e-vehicle gospel far and wide. The future is in our hands; let’s make a difference!