Excuse my profanity, but if the shoe fits…

Prodecotech has positioned itself as one of the ‘Big Three’ in the U.S. e-bike marketplace in a relatively short amount of time. They recently completed their move into a cavernous production facility in Florida which allows them to provide fast and precise support to their dealer network. We’re pleased to have been chosen to represent them locally. Their lineup is quite extensive and, for now, the bike that wows us the most is the Outlaw series. 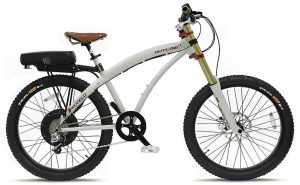 The Outlaw is a veritable feast for the senses. Everything about this bike screams ‘muscle e-bike’! The beefy frame, robust dual crown fork, hydraulic disc brakes, 48 volt battery and 750 watt motor combine to make this a fierce performer. Leather saddle and grips, SRAM drivetrain, and aggressive wide tires on triple wall rims add to the appeal and worthiness of this bike.

The candy orange metallic Outlaw SS is intended for off-road use only and, as such, is capable of 28 mph at 1200 watts peak power output. These bikes harken back to the days of the American muscle car. If you want a ride that’s guaranteed to turn heads everywhere you go, the Outlaw is the bike for you. There’s no flying under the radar with these bad boys. 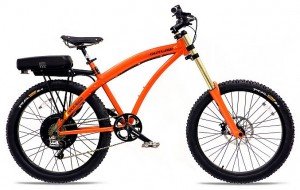 All these features and a commendable level of performance are available for only $2299. Nice job Prodecotech!