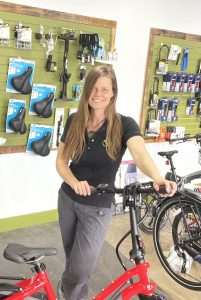 Jerry Solomon, founder of Ashland Electric Bikes, began his love affair with all things two-wheeled as a child back in the sixties when he customized his first Stingray-style bicycle with a homemade chopper fork and sissy bar. The adventure continued, including a decade of extreme mountain biking in Crested Butte, CO, where he also did a stint as the local ice cream man on a custom three-wheeled-bicycle. Then Jerry got his first ride on an electric bike, and he knew this was the way of the future. In 2008 he sold his first custom build, and slowly took his new passion for electric bikes and grew it into the successful business that Ashland Bikes would become.

After fourteen years at the helm Jerry passed the torch to Samantha Smith and is enjoying a well-deserved retirement.

Samantha brings her passions for the outdoors, physical activity, and sustainable living to Ashland Electric Bikes. She and her knowledgeable team are committed to a cleaner, healthier world for everyone on the planet and generations to come. The team sees electric bikes playing a vital part in the collective vision to minimize our carbon footprints by becoming one – or even zero – car households.

Our goal at Ashland Electric Bikes is to offer high quality electric bikes that provide excellent performance and the highest level of customer satisfaction. Our bikes are designed and built to last year after year, long into the curious and exciting future that awaits us all. 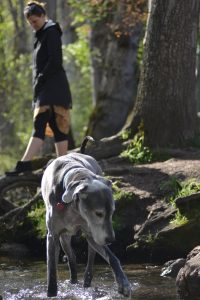 We are at a very definitive point in time on planet Earth. The collective decisions humanity makes in the next few years will have profound implications far into the future. Issues of sustainability and environmental impact are demanding our full attention. Transportation and the burning of fossil fuels must be revisited at every level. Ebikes play an integral role in re-envisioning the way we all literally ‘move in the world’.

In these dynamic, changing times it is up to every one of us to do our part to co-create a healthy, sustainable future for ourselves and generations to come. At Ashland Electric Bikes we take great pleasure knowing that we’re helping ‘green up’ the world…one bike at a time.

We’re also the longest standing Electric Bike only shop in the United States!

Read about it here.